The collection Allerleirauh is based on the Grimm’s fairytale of the same title—a coming of age tale about finding one’s identity after a painful process of detachment and alleged solitude, all the while carrying one’s prosperous future self throughout the process.
In the story a princess flees from her father’s kingdom and has to survive in the woods with the help of a mantle, made from every kind of fur in the kingdom, which serves her as camouflage. Further she carries her deceased mother’s jewelry and three magical gowns in a nutshell—one as silver as the moon, one as golden as the sun, and one as dazzling as the stars.

Lina translated the concept of garment as a shelter into silhouettes, that wrap and disguise the body, that look confusing and as if they were tied around the body in haste. The jewelry pieces seize on the contrast of precious and crude, and reflect the transition from child to grown-up. 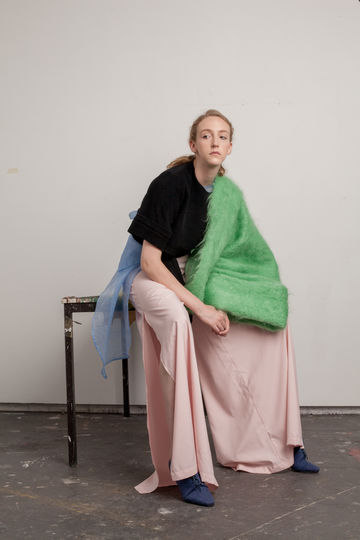